Alrighty...I'm trying something new here on AZ.  I've oft been criticized for my writing mostly because it's too "complicated" to understand especially when I'm writing about complex issues. With that in mind, I've decided to branch out and try some Voice Over (VO) narration, nothing fancy, to explain the following series of posts I'm going to make regarding the DHECC and the potential for fraud taking place within the claims process and the possible manipulation of the process by the PSC lawyers.  It is pretty complicated stuff but I hope to make it less complicated with this VO.

I am enclosing links below, as well an open letter I have sent to Federal Judge, Carl J. Barbier.  Let me know what you think and I do have a rough draft of the V.O. if anyone wants me to publish text.

Here is the letter I sent to Judge Barbier requesting the claims data be redacted of any personal claimant information and made public: 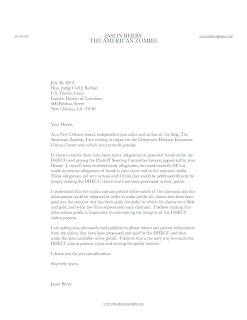 Getting Skewered in New Orleans

Sounds of the Jungle

Thieves in the Temple

That being said, I did work as a paralegal on numerous class action cases for Calvin Fayard and was always following developments in other class actions.

Without exception, I have never seen a situation like the current BP case where a class settlement fund was almost $8 billion dollars, and the class counsel would be paid fees equal to less than 10% of the fund.

When it was first announced that the class counsel had an agreement with BP, whereby BP would not object to a fee of $600 million or less, I thought "well, that's pretty low and there has got to be some other way the class counsel is going to recover more than that."

I personally think we are seeing that "other way" manifest itself, at least partially, through the damage claims being made by PSC law firms and other law firms and lawyers associated with the PSC lawyers.

I personally like your letter to Judge Barbier, but I don't think you will get a favorable response. I do believe BP and Mr. Freeh have taken note of your concerns, and that is why BP is making noise about the PSC firms and lawyers making claims.

In the event they are readers of AZ, I would say this, again: Look at each PSC member and the original lawsuits in which they were enrolled as counsel BEFORE they were appointed as a PSC member. They came to the dance with others as part of a group. Some of their dance partners have received appointments to various committees. I would bet ALL their dance partners had access to the formula, and I would bet some of those partners have successfully filed claims.

Totally fucking depressing. How is anyone who is a fisherman or a fish processing plant worker or a small town business owner whose tourism seasons have been destroyed by fouled beaches and waterways supposed to figure out how to get redress?

I'm sure there are some people who have already just died of sorrow and broken hearts.