School is out for Xmas break this week and I seem to be the designated group daddy for everyone who has a real job.  Today I had 3 munchkins and my teen-age son to handle.  The hardest part is to keep the munchkins from destroying my son's stuff and driving him crazy.  That and lunch...we deliberated over lunch for about 30 minutes until I finally made the decision to take them to the Lakeside Mall food court in an effort to be all things to everyone.

After standing in line at three different food vendors, I bought them all ice cream to pacify the tension as we strolled down to the Christmas exhibit in the center of the mall.  It's actually a pretty extensive toy train lanscape with a big train, rideable by smaller children (and apparently news anchors), encompassing a number of miniature village scenes set in a snowy, mountainous landscape.

As I was checking out the display I immediately noticed a hospital building with the title "Affordable Health Care Hospital".  My stomach turned upon the sight...I knew the closer I looked the more I would wish I hadn't.  Sho' nuff....I wish I hadn't. 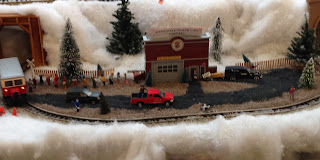 The resolution on the pix are not so great but all I had was my phone.

WWL-TV has already done a story on the display and the guy that made it, Frank Evans.  He's the same guy that made the controversial Katrina Xmas exhibit at Lakeside Mall after the storm.  I debated writing about this because it seems so trivial on one level but the one thing that the WWL-TV report failed to point out was the blatantly racist aspects of the display.

It's one thing to lampoon the President and Obamacare...I'm not sure why it needs to happen in a mall but if Lakeside wants to make a political statement during their busiest time of year, I guess that's their prerogative...but the racial aspects of the display are damn downright offensive.  Some of them are so subtle they wouldn't be noticed by most people if they were looking right at them but I did notice and I want to point them out.

Aside from the obvious Mexican worker wearing a sombrero and giving the thumbs up while riding in the back of a truck, I noticed two questionable figures standing in line. 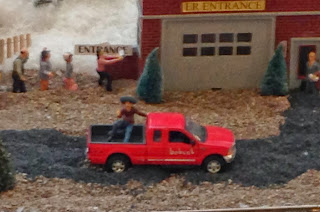 The most egregious is what appears to be a black man, or a man in black face, dressed as an aristocrat standing behind a clown.  The man's face is definitely black but it almost looks like it's painted as "blackface".  I think Evans' message is pretty clear, either way.

The second figure is a man with quaffed hair in an orange jumpsuit...I think it's Evans' version of a gay man.  The woman standing in front of the "gay man" is scantily clad and could represent a prostitute but I may be stretching it there. 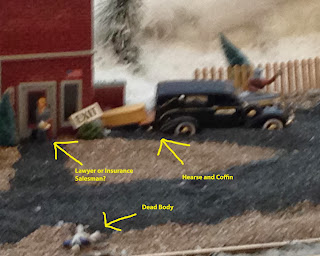 Aside from the coffin coming out of the hospital into the hearse, the dead man on the ground and the general anti-Obamacare statements, the racial aspects of the display are outrageous.  I couldn't help but notice that well over 50% of the customers in Lakeside Mall today were of an ethnicity other than Mr. Evans, my own children included....Latin, African-American, Asian.  I find it incomprehensible that Lakeside Mall management would allow this display to have stood through the Christmas holiday.

My son (his mother is Asian) is fluent in Spanish and is currently learning Mandarin as his third language.  He he had just carried on a conversation in Spanish with one of the Latin employees in the food court as I sat back and watched in amazement.  Jake attends ISL (International School of Louisiana) as does my daughter and the other kids that were with me today.  It always makes me proud when I see these kids conversing with people in different languages because I know barriers are being broken down and that's something I could never do when I was a child.

To leave that moment and walk right into one where some douchestick from Gretna has put his own prejudices and xenophobia on full display in the middle of the fucking mall was a bit too much for me.  I try to stick to a strict diet here on AZ of government corruption but as my son said while we stared at this exhibit, "It's horrible, Dad."

Yeah, it is horrible and I think that will be the last time I patronize the Lakeside Mall...I would encourage you to avoid it as well.  Maybe I'm on a soapbox here but you know this isn't Krewe d'tat, it's the most public venue in Jefferson Parish.  It bugged me so much I couldn't not write something about it.

This isn't an anti-First Amendment rant, I would never say Lakeside Mall doesn't have the right to put it up...I'm just saying they're promoting racist banter they need to be called out for and you should know who you're patronizing if you shop there.

Thanks. It's good to know that I'm not welcome there.

I don't do malls very much anymore - I'll stick with the Apple Store in Baton Rouge. Baton Rouge has some issues, but nothing so blatant is you've described.

Absurd. It's not a representation of the entire community if some cretin sneaks in his crackpot politics this way. Lakeside management simply needs to be made aware of what has been inappropriately done here by the bigoted decorator. Major retailers aren't on board with this sort of thing. A phone call from Macy's corporate would make it vanish instantly. Guaranteed. A call from a blogger instead of a foamy rant would probably accomplish the same thing in view of the issue. But then, we like the spotlight on ourselves, don't we?

And set in an old gas station. Pitiful.

This must be the first time you've visited this blog, eh?

^^Funny comment though...somehow it ends up being my fault Lakeside allowed this. And they were fully aware of the exhibit in case you didn't read/watch the WWL story.

Also, you're suggesting Metairie doesn't have a racism issue? That's rich...tell me more about that.

Take it to the top.

I think you may be reading far too deep into the intended visual conception intended by the display artist.Being conservative I look at what you pointed out to be an artist's ironic rendition to illustrate that the liberal populace, who voted for Obama and Obamacare( its not a secret who the new pro-Obama voting demographics were as announced by all the news media), will unfortunately find themselves becoming sacrificial lambs in a socialistic healthcare system resulting in more deaths for everyone! (i.e. equally tragic for all Americans as I assume the other figures in the hospital emergency line you did not diagram out where Caucasians of various European descents).

I think you may be on crack. He put a Mexican guy with a sombrero in the back of a pickup truck in the front of the exhibit giving a thumbs up. What part of that am I misconstruing?

Jason, the only thing you may be misconstruing is that the anon at 9:16 AM is exactly the target market for that display, knowwhutimsayin?

The Apple Store. That's the only reason I have stepped foot in Lakeside since Katrina. I will take personal responsibility and send them a note. Hopefully they will say something to the Lakeside management. Thanks for spotting this and writing about it, though I am sorry the kids had to see it (but the kids got how horrible it was, pretty cool, eh?).